What’s the difference between your dog and a wolf? 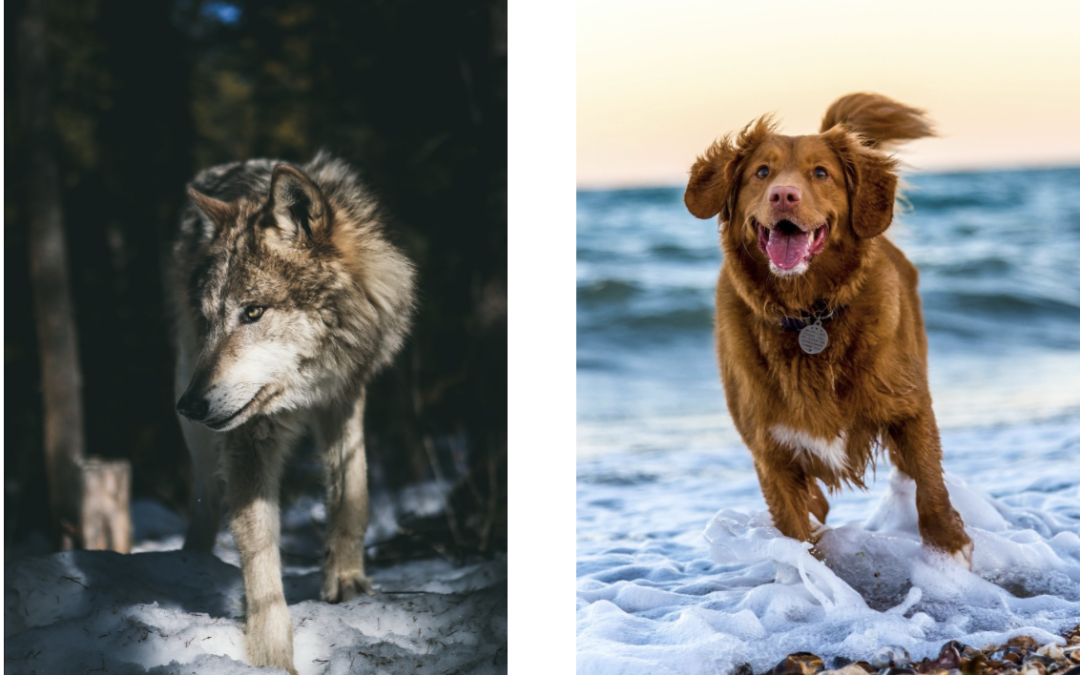 Regardless of when and how they found their way into our hearts and onto our couches, it’s clear that our cuddle buddies are pretty different from their wolf counterparts.

But how? Here are 5 major differences between our dogs and wolves:

Our dogs have wider frames, floppy ears, shorter snouts and smaller tails than wolves do. Wolves have bigger paws, larger heads, and stronger teeth and jaws.

Wolves are built for endurance, our dogs at home are not (since they don’t need to worry about their next meal in the wild.)

Floppy ears and shorter snouts are only present in wolf pups – both of those qualities go away as they grow up and into themselves.

Dogs are able to be trained to follow our commands. They love pleasing us and being rewarded for good behavior.

Wolves can’t really be bothered to go through the same training as domesticated dogs. They don’t have the patience for it, and they also don’t have the same established relationship with us as dogs do.

In studies, researchers have presented both wolves and dogs with a problem to solve – like a puzzle box. The wolves tackled the problem through trial and error, while the dogs looked to their human companions for help.

Wolves are also able to solve problems at a much younger age, since they mature faster in order to survive in the wild.

When we interact and bond with our dogs, both our brains and our dogs’ brains release oxytocin. Oxytocin is a hormone that is connected to trust and maternal bonding.

We’re the only interspecies pair that connects this way. Other mammals, like wolves, only establish that relationship between mates, or between mothers and pups.

When we play with our dogs, it’s for them to get exercise and entertainment. For wolves, playing with each other at a young age helps them develop hunting skills and socialize with the pack. It enables them to test their limits and find their place within the pack structure.

The differences between dogs and wolves stem from having different lifestyles. Wolves need to be able to survive in the wild, while our dogs need us to open the food packages.

But there are still some similarities that point back to their connection as a species thousands of years ago.

Wolves form packs with each other, while we form packs with our dogs – we establish that same trust, although it comes out of a different need than survival in the wild. Who is in your domesticated pack? Share your pics and tag us on Instagram or Facebook!