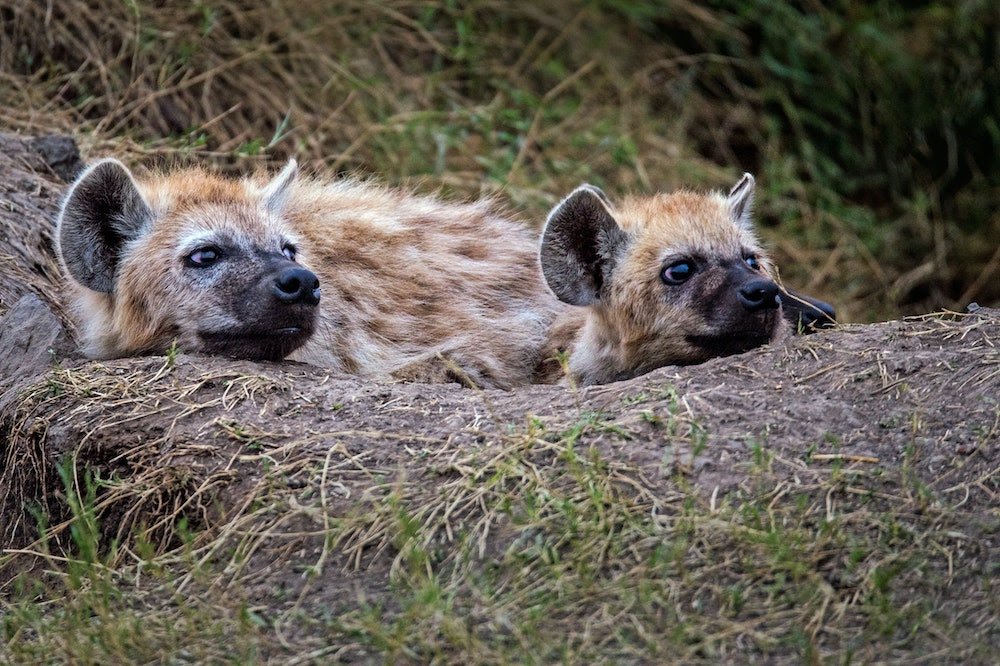 Hyenas are mammals and omnivores that are part of the Hyaenidae family.1&2 There are three species of Hyena:

Spotted Hyenas are the largest of these. They can live to be 25 years old. They weigh between 110 and 190 pounds and are 34 to 59 inches long, not including the tail, which adds 10 to 14 inches. They have a great sense of hearing and sight, and they’re capable of running quickly for long periods of time.1

These hyenas are very social and have a complex social hierarchy. They often live in clans, which can be made up of up to 100 hyenas, and they are matriarchal (female-led). The females will stay with the same group, while the males will disperse to other groups.3 The female hyenas are slightly larger than the males and they are also more aggressive. Any hyena within the pack is subject to the social rank within the group. It determines everything from how they hunt, eat, and fight.2

Spotted Hyenas may hunt as a group or on their own. Sometimes they’ll scavenge animals that have been killed by another animal.1 When hunting individually, they’ll go after rabbits, jackals, and bat-eared foxes, while when hunting as a group, they’ll go after bigger animals like wildebeests or antelope.1&2 They often have conflicts with lions – lions are the only predator to the Spotted Hyena besides humans. After a group of hyenas has taken down prey, lions will often come around and steal it from them. Lions and hyenas will face off against each other to claim the prey.2

Overall, these hyenas are considered of Least Concern, according to the IUCN.1 However, that doesn’t mean they don’t face any threats. They often face conflicts with humans, which only is made worse by deforestation – this forces hyenas to get closer to humans. Drought is also a major threat.2

Reforestation is a conservation method to combat deforestation, and there are a lot of benefits it provides to habitats. Read more on our blog.