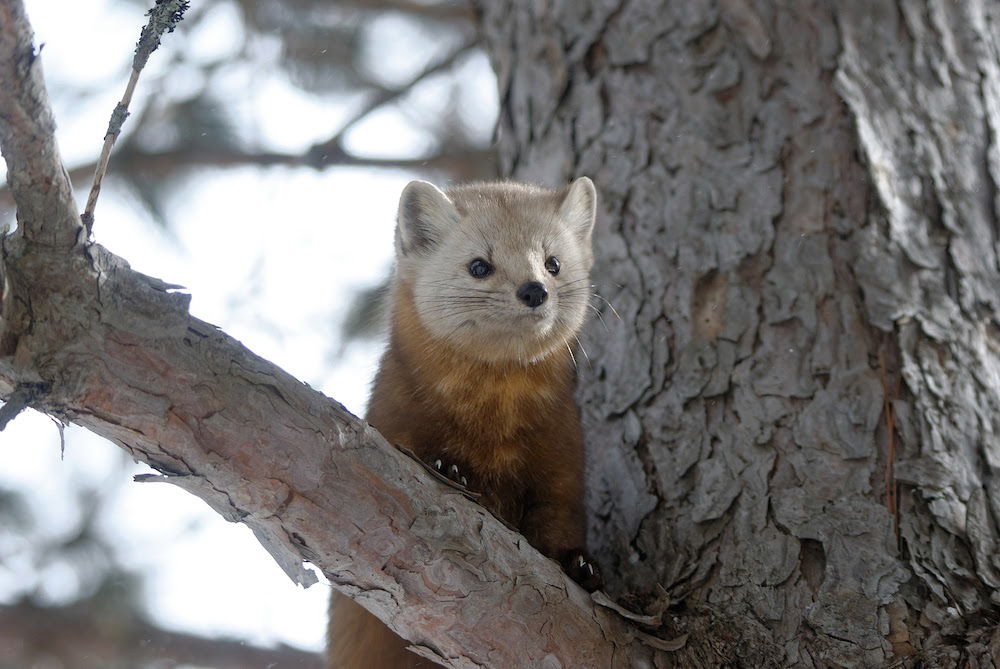 Pacific marten is one of the latest mammals on Earth to have achieved their distinct species declaration.  They are so misunderstood that they were believed to be extinct until a recent discovery of a surviving population in 1996.  Long thought to be a subspecies of the more populous American marten (Martes americana), detailed skull measurements and genetic studies show Pacific marten is a separate species.  Since this landmark decision in 2012, efforts have been underway to better understand the small carnivore’s population size and critical habitat.  For now, they are protected by numerous states and are currently under a proposal to be listed by the US Endangered Species Act.

Possessing the typical elongated, weasel-like body of the Mustelidae Family, Pacific marten resemble a smaller version of their cousin, the fisher.  Standing on short, yet powerful legs, their bodies range from 1.5-2 feet long, and have bushy tails averaging around six inches.  Adults typically weigh between one to three pounds but have been recorded as high as nearly four pounds in Alaska.  Males are significantly larger, with some records showing they outweigh females by up to 65%.  Although sexual dimorphism is apparent with body size, both males and females are colored the same way.

Pacific marten have dense, plush fur that ranges from light tan to deep brown with their legs and tail usually darker than the body.  The head and underside of the neck are typically lighter in shade than the remainder of the body.  Juveniles tend to have pale chest coloration that turns bright orange as they mature.  Thin black lines extend up the forehead from each inner eye corner and the ears are rounded, like many cats.

Since only recently becoming a distinct species, the full extent of the Pacific marten range is not yet understood.  However, we do know populations exist in remote forests of Washington and British Columbia.  The Pacific marten range extends South into the mountains of California and Eastward to South Dakota.  The pine and fir forests of the Northern Rockies contain fragmented populations, but the most contiguous habitat exists within the Cascade Mountains and rainforests along the Pacific Northwest coast.

The distribution of Pacific martens seems to be dependent on the average snow depth and human disturbances for each location.  Martens require a large territory with an adequate canopy cover to hunt sufficient prey.  Studies have shown they avoid open meadows and clearings, so human development is a limiting factor for suitable marten habitats.  Additionally, Pacific martens choose to live in areas receiving deep snow in winter.  This is believed to prevent predation, as larger carnivores would struggle in deep powder, while marten use tunnels under the snow for fast, efficient winter travel.  Studies prove martens inhabiting terrain with less than a foot of snow are far more likely to be preyed upon by larger predators.  Climate warming and the expected decrease in snowfall are predicted to threaten marten survival for this reason.

Like many mustelids, Pacific martens are mostly solitary throughout life, only joining together for breeding once a year.  Once mating occurs in summer, the implantation of the blastocysts to the uterus is delayed by six months, so the litter is born in April or May.  Born within a tree cavity or rock den, most litters consist of three to four young but vary according to available food for the mother during gestation.

Marten pups are tiny (approximately one ounce at birth) and dependent on their mother for survival for the first several months.  Their eyes open around five weeks with weaning to solid food following at six weeks.  By the end of their first summer, most juvenile martens venture out from their mother’s care to begin a solitary life.  The pups then reach sexual maturity at two years old and can have their first litter at three years.

Pacific martens are voracious mesocarnivores who prey upon small to medium-sized animals wherever they live.  However, the exact prey type varies greatly across their range and mostly depends on availability.  In Alaska, most of their diet consists of small rodents like voles or mice.  Where along the Pacific coast, marten prey upon birds, their eggs, and fish.  Further inland, larger mammals such as squirrels and chipmunks are on the menu.  No matter where they live, all Pacific marten dine on insects, berries, and carrion left behind by larger predators.  Many stories tell of the “sweet-tooth” possessed by marten, who allegedly have an affinity for jam and other sweets.

Research has shown that Pacific martens are highly susceptible to population fluctuations within their local prey species.  If prey populations decrease for any reason, marten typically leave the area to find more abundant prey elsewhere.  However, being highly territorial, Pacific marten fleeing from inadequate prey are often attacked by other marten defending their territory or starve during their search for suitable habitat.  Unfortunately, human disturbances, such as logging or fire management, often cause Pacific marten to lose adequate prey, forcing them to risk the dangerous journey to a new land.  For these reasons, Pacific marten populations are vulnerable to human activity.

In addition to providing control of many primary consumers, Pacific martens also provide an important food source for larger predators on both land and in the sky.  In British Columbia, the most known predation comes from above, as multiple hawks, owls, and even bald eagles prey upon them.  In Oregon, land carnivores were responsible for most deaths, with bobcats leading the charge.  A multitude of other predators lives within their range, with all of them contributing to marten consumption.  The extensive list includes lynx, coyote, fisher, cougar, golden eagle, wolverine, black and grizzly bear, and even gray wolves will snack upon them if given an opportunity.

Originally believed to be strictly nocturnal, new research on Pacific marten hints at a seasonal change in activity levels.  In some areas, the martens are chiefly nocturnal during winter, then transition to diurnal during the summer months.  However, in the far north of their range, this activity pattern is the opposite, with marten using the heat of the sun during winter days to forage while conserving heat throughout the night in their nests.  Regardless of local activity patterns, marten in cold climate regions can slow down their metabolic process to conserve energy through winter.  By doing so, they can capture less prey, which saves even more energy during the most challenging time of year.

As with many of their Mustelid relatives, Pacific marten is a fur-bearing commodity where their populations are stable.  Their look-a-like cousin, the American marten, continues to be legally trapped across most of their shared range, leading to the unintentional trapping of the struggling Pacific marten.  Although states may try to educate trappers on the appropriate species, incidental take remains a threat to ailing Pacific marten populations.

Additionally, the clearing and fragmentation of forests for human development greatly hinder marten survival.  Studies have shown Pacific martens avoid traveling across land that is free of tree cover.  Likely, the lack of a canopy makes them vulnerable to predation from raptors.  Likewise, there is ample documentation of how logging operations push marten from the forest, adding yet another human-caused hurdle to their struggles.

Finally, new evidence is surfacing that Pacific marten are interbreeding with American marten where prey or habitat loss is occurring.  Both species of marten co-exist in many parts of their respective ranges, but this new phenomenon is likely a desperate tactic taken when a partner of their species cannot be found.  Through time, this interspecies breeding will dilute the genetics of both species, leading to an increased chance of disease or other deleterious effects.  Wildlife management practices should immediately consider this threat and take action to prevent further cross-species breeding.

New genetic research gave rise to the Pacific marten as a unique species, separating it from the American marten after believing the two are the same species for centuries.  Now the rush is on to gather scientific evidence of population size and risks to survival before the newly crowned species fades away to extinction.  We already know forest fragmentation and logging are significant threats, while climate change is predicted to complicate their struggles even further.  We must urge forest managers of the Northwest to include sufficient suitable habitats for Pacific marten to flourish.  Without these marten filling the critical mesocarnivore role of the Pacific Northwest, rodents will expand unchecked while larger predators go without the sustenance marten provide.  We have time to save this imperiled, unique species, but we must act quickly.