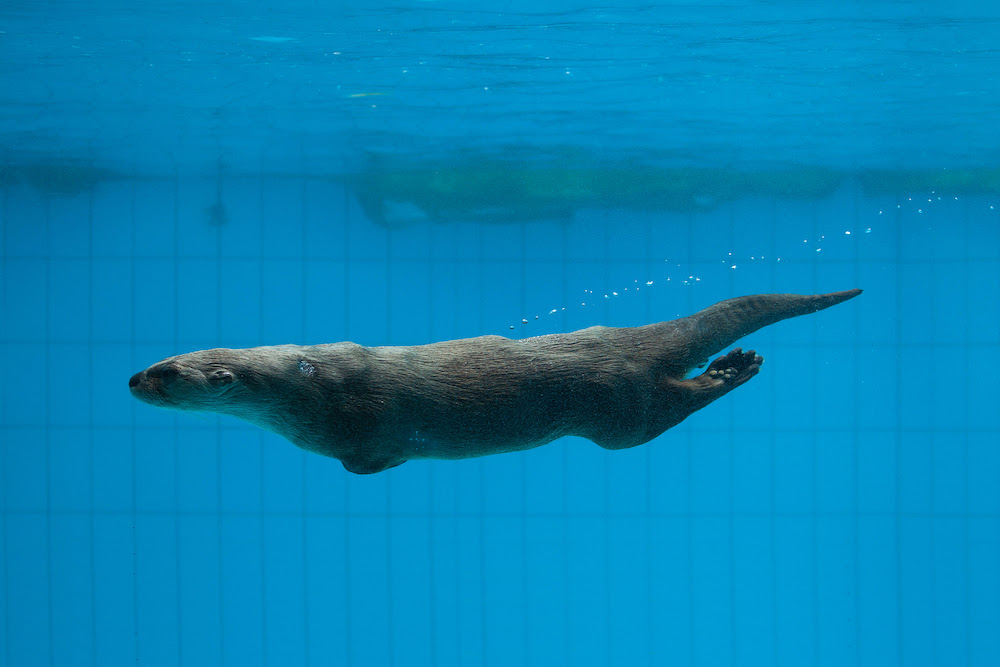 Before the European settlement of North America, river otters inhabited every waterway on the continent.  The traditional abundance of this mesopredator and the subsequent drastic reduction in population caused by humans makes them an iconic North American species.  Although some local populations of otters are on the rise due to conservation efforts, this sensitive species remains at risk from human-caused environmental disruptions.  Widely recognized as an indicator of healthy aquatic habitats, river otters have become a symbol of the struggle between native wildlife and a growing human population.

A large member of the weasel family, North American river otters resemble the typical elongated body and short legs of the mustelids.  Measuring between 2.5-3 feet in length as an adult, male otters average about five percent larger than females.  Males typically weigh around twenty-five pounds but could reach as much as thirty-three pounds in healthy ecosystems, compared to the average 18-pound weight of females.

An otter’s body is built for efficient mobility when submerged in water rather than land travel.  Their muscular and tapered tails are used as both rudders for steering as well as fast bursts of speed when swimming.  The fur is dense, thick, and oily to protect them from losing heat when in chilly water.  All paws have webbing between the toes to further assist in water propulsion, while specialized skin flaps close over their nostrils and ears to prevent the intrusion of water. Plus, a translucent eyelid, known as a nictitating membrane, covers and protects their eyes when underwater.

Additionally, river otters have further adapted for submerged life by developing specialized lungs, where their left lung contains only two lobes, versus the larger four-lobed right lung.  The decrease in lung lobes is believed to assist in preventing unneeded buoyancy, therefore aiding diving and swimming.  Their long, sensitive whiskers allow prey detection when navigating through murky waters and their large, webbed paws are tactilely sensitive, which helps with searching for food along the bottom of rocky streams and lakes.

Although able to see well underwater, otters are near-sighted by nature because of the close contact with their prey underwater.  Therefore, they are known to swim up to boats or near humans onshore for a better view.

RANGE
North American river otters were once abundant in every significant waterway and coastal region of the United States and Canada.  Extensive trapping by early settlers, then habitat destruction by later commercialization of waterways completely extirpated many otter populations across the continent.  Subsequent trapping and hunting regulations eventually rebounded otter populations along the coasts, however, otters have not returned to most of the US mid-west.  Multiple states now have established protections and reintroduction projects in attempts to restore the important predator.

Water is the most important aspect of river otter habitat, but the type of water body does not matter.  Otters can live in shallow mountain streams, deep lakes, estuaries, or even along ocean beaches.  They tend to remain in one area if prey is sufficient to sustain their family.  Once food becomes scarce, otters will move on to another section of the river or a different waterway altogether in search of suitable food.  This behavior prevents the extinction of local populations of fish, therefore self-regulating the impact of predation upon a closed water system.

LIFE CYCLE
River otters are quite social, often living within family units or groups of unrelated individuals.  Although each family patrols a specific territory for food, otters are not defensive of these territories and often share the same hunting grounds with neighbors.  Although otters are polygynous, when a litter of pups is born, the father occasionally remains with the family.

North American river otter breeding season occurs in the winter, beginning in early January and culminating around March, with estrus lasting around a month.  After mating, females delay implantation of the fertilized egg for a minimum of eight months.  Once gestation begins, the kits are born about two months later, therefore the entire pregnancy lasts almost a year.  This process allows the young to be born in March or April when food sources are plentiful.

Up to five kits can be born each year, but most litters average one to three blind, fur-covered, toothless youngsters.  Their eyes open after a month, they learn to swim at two months, and eventually weaned to solid food around four months.  The juveniles can leave the den by eight weeks, then survive independently by fall, however many remain with their mother.  Juveniles reach sexual maturity at two years old at which time they may leave to begin their own family.  Although captive otters have lived up to twenty-five years old, most wild otter lifespans are around eight years.

ECOLOGY
North American river otters hold an important aquatic mesocarnivore role in waterway ecosystems throughout their range.  Although their diet varies from location to location, fish is the main entrée of otters everywhere.  However, they tend to take the slower swimmers, such as catfish, sunfish, and carp, which are less prized by anglers than the faster swimming game fish, such as trout.

When not fishing, river otters seek out and dine on crayfish and crabs.  In some estuaries, crustaceans may constitute most of their diet.  When an opportunity arises, many species of frogs and salamanders are consumed, and they sometimes hunt down garter snakes too.  Analysis of otter feces also shows a wide variety of insect adults and larvae are consumed.

As with all mesocarnivores, river otters will be omnivorous when hunting success is slow.  Fruits of local shrubs and trees are consumed, especially in fall during berry season.  However, contrary to many other mid-sized predators, river otters are not scavengers and will not consume carrion.  They will ambush ducks when nesting on the ground but interestingly will not consume the eggs.

In addition to being an important carnivore, river otters also are a food source for larger predators in both water and on land.  Although rare, otters have been preyed upon by American alligators and even orca when swimming in deep coastal waters.  When on land or ice, otters must keep a watch for predators such as bobcats, cougars, coyotes, wolves, and bears. Still, humans kill more river otters through trapping, roadkill, or accidental catch in fishing nets than any other natural predator.

HABITS
North American river otters are one of the most social mustelids, both living in family units and groups of unrelated individuals.  Males are known to gather into crowds up to seventeen strong, all cooperating.  Mothers live with their offspring during rearing, occasionally fathers join them although he typically does not assist in raising his kits.  A family of otters may live together for several years.  To assist in socializing, otters have evolved a modest vocabulary of grunts, growls, and hisses to communicate.  Olfactory messaging is also accomplished through musk gland, urine, and feces scent marking.

INTERACTIONS WITH HUMANS
Historically, river otter pelts were prized among both Native Americans and European settlers alike.  Accordingly, otter populations declined rapidly as more settlers spread across the continent.  Next, human development along waterways provided an additional challenge to their survival.  Studies have shown water pollution is the largest hindrance to river otters because they are prone to elevated bioaccumulation of toxins.  Otters are now absent from the most heavily commercialized and polluted waterways.

Outdoor enthusiasts cherish the sighting of a river otter in the wild.  Not only is the sight rare in many locations, but it also delineates the ecosystem as healthy.  Otters can be curious and often approach humans to get a better look with their near-sighted vision.  Although river otters pose no danger to any humans, there have been several cases of small dogs being attacked and drowned.

CONCLUSION
River otters maintain an important aquatic mesopredator role in the North American ecosystem, controlling fish, insect, and amphibian populations.  Despite the challenges of their wild existence, humans remain the primary threat to otters through trapping, habitat destruction, and water pollution.  Conservation efforts are underway in some areas, but more is needed to fully restore otters to their native landscape.  Support clean water initiatives and updated conservation zoning of waterways to best assist the recovery of North America’s iconic river otter.