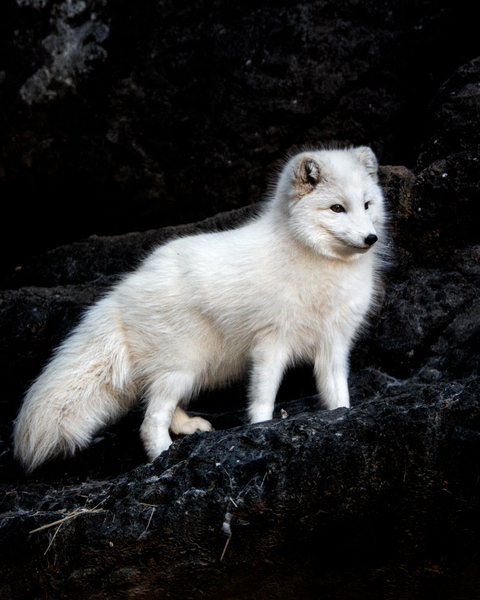 Built to survive in some of the harshest conditions on Earth, Arctic foxes play an important mesocarnivore role in ecosystems of the far North.  Living in lands that remain below freezing for most of the year is a huge challenge for such a small mammal, but these highly adapted and cunning foxes find a way to flourish on the dark, frozen landscape.  Their bright white fur may provide their most recognizable trait, but the density and layering of the fur, not the color, is their primary adaptation to battle the brutal cold.

As with many northern mammals, their fur coat is double-layered and seasonal.  The plush, insulating undercoat builds to the highest density in winter for insulation, then sheds off in spring to prevent overheating throughout summer.  To keep their body temperature consistent year-round, there is an astounding 140% increase in fur density among winter pelage compared to summer.  Many biologists believe the fur of Arctic foxes may be the best insulating hair layer in the Animal Kingdom.

Two color morphs exist for Arctic foxes, the popular all-white phase, and a rare deep blue to gray color variation.  Studies have shown blue phase foxes tend to live near coastal habitats where the terrain is rockier, while white phase foxes live more inland where snow and ice are the predominant substrates.  All white phase foxes molt to a brownish color in summer for camouflage, but blue phase foxes remain the same color year-round.

Arctic foxes are smaller and more compact than other fox species, assisting with heat conservation.  Their short legs, little muzzle, and stocky ears all allow for a less mass to surface-area ratio, limiting heat loss.  Both sexes are about the same average size, measuring 20-22 inches long plus a long tail of around twelve inches.  Such an extended tail is an important adaptation used to cover the less-insulated head and muzzle while lying, further preventing heat loss.  Standing about ten inches tall, both sexes also weigh in at the same average weight of 9-10 pounds.

Another unique freezing weather adaptation provides the scientific name for the Arctic fox.  “Vulpes lagopus” translates from Latin to “fox with hare foot” signifying the similarities with the fur-covered feet of northern hares.  To prevent frostbite, Arctic foxes have fur covering the pads of their paws, a trait that is unique among all other canines.  Additionally, like gray wolves, Arctic foxes can regulate the temperature of their paws to just above freezing, therefore preserving valuable energy during winter.  Finally, Arctic foxes have such an incredible tolerance to cold, they do not begin shivering until the temperature dives below a frigid -94 F!

Ready to read more about the Arctic fox’s range, life cycle, ecology, habits, and interactions with humans? Check out the rest on our blog!