How do dogs help with Eurasian oystercatcher conservation? 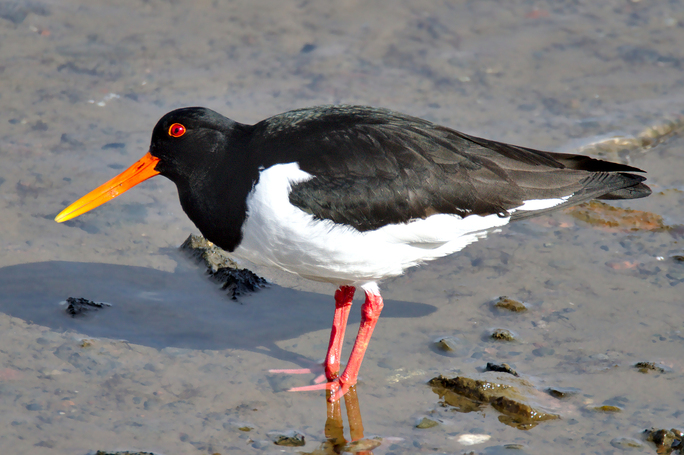 As we discussed in previous Canines Assisting Conservation segments, coastal wetlands are important habitats for many bird species.  Additionally, these marshes filter sediment from waterways and absorb floodwaters, both of which are major benefits to humans living near the coast.  Unfortunately, industrial and residential development threatens coastal wetlands around the world.  Rising seas caused by climate warming add yet another stress upon these important ecosystems.

In Europe, scientists have identified an indicator species for gauging marsh and estuary health.  When Eurasian oystercatchers are present within the system, the area is considered relatively healthy.  These wading shorebirds are quite sensitive to where they place their nests, so a healthy population of oystercatchers usually means the marsh is functioning at optimum capacity. 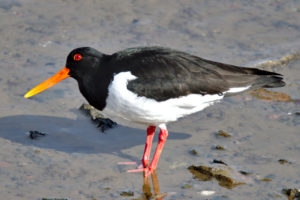 The Eurasian oystercatcher was once plentiful within Europe and Asia, however, the population has suffered a steep decline over the past two decades. Scientists use oystercatchers as healthy marsh indicator species.

Historically the Eurasian oystercatcher (Haematopus ostralegus) was plentiful across most of Europe, spanning from the far Northern reaches of Scandinavia down to the middle of Africa, with large populations around the Mediterranean Sea and along the shores of China.  Oystercatcher populations increased from the 1960s up until the 1990s, but then began a sharp decline.  In some areas numbers have decreased by some 40% over a few years.  This alarming trend earned them placement onto the IUCN’s Red List as Near Threatened in 2019 and has scientists scrambling for answers.  The main cause is believed to be overfishing of the wader’s primary food source.

Contrary to their name, oystercatchers eat more mussels, limpets, and worms than oysters.  European mussel stocks have been on a steady decline due to excessive industrial harvesting by humans.

In addition to losing their major food supply, destruction of habitat further stresses the existence of these important indicator birds.  As humans drain and develop marshlands, oystercatchers lose critical nesting and foraging grounds.  Studies have shown these sensitive birds are easily disturbed by human presence, so even if encroachment does not immediately destroy their habitat, the mere proximity of humans may render the marsh vacant of oystercatchers.

Other threats facing the species include increasing pollution, invasion of noxious alien plants, and increasing flooding of wetlands caused by sea-level rise. 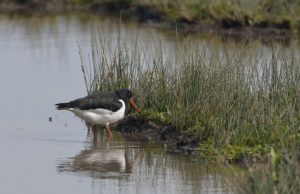 The often inaccessible wetlands along coastlines make the perfect habitat for Eurasian oystercatchers, however, this terrain creates great difficulties in studying the declining population.

Since noticing the dramatic decline of Eurasian oystercatchers, conservationists are taking steps to curb the freefall decrease by determining critical habitats which can then be protected from development.  To accomplish these protective measures, we must find where oystercatchers prefer to nest and forage.  However, surveying muddy, dense, and often impassible wetlands or coastlines for well-camouflaged nests is not an easy task.

Biologists resorted to performing oystercatcher vocalizations then hope for a return call as the main method in determining the presence of the shy birds.  Still, this technique could never produce accurate population counts, a better way was needed. 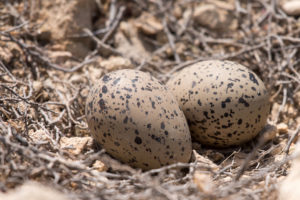 In 2017, Norwegian researchers were the first to attempt scent-detecting dogs to search for Eurasian oystercatchers.  As we have witnessed with many other difficult to locate species, trained canines are much more proficient in seeking out oystercatchers than human technicians.  The conservation canines can be trained to sniff out both individual birds, as well as their nests so search methods can be adapted for the specific requirements of each study.

However, some obstacles remain with the use of research dogs, such as the muddy terrain and disturbing nesting birds.  The use of dogs is new to oystercatcher research and with some refinement, conservationists hope to expand their role in oystercatcher conservation efforts in the future.

Recently, experimentation with aerial drones shows some promise in locating oystercatcher habitats.  Due to the difficulties involved, it is likely many tools will be necessary to accurately determine critical habitat for oystercatchers.

Conservation canines will undoubtedly be one of the methods used in the fight to save the Eurasian oystercatcher.

For further reading or to support Eurasian oystercatcher conservation: