How Do Dogs Help With Desert Tortoise Conservation? 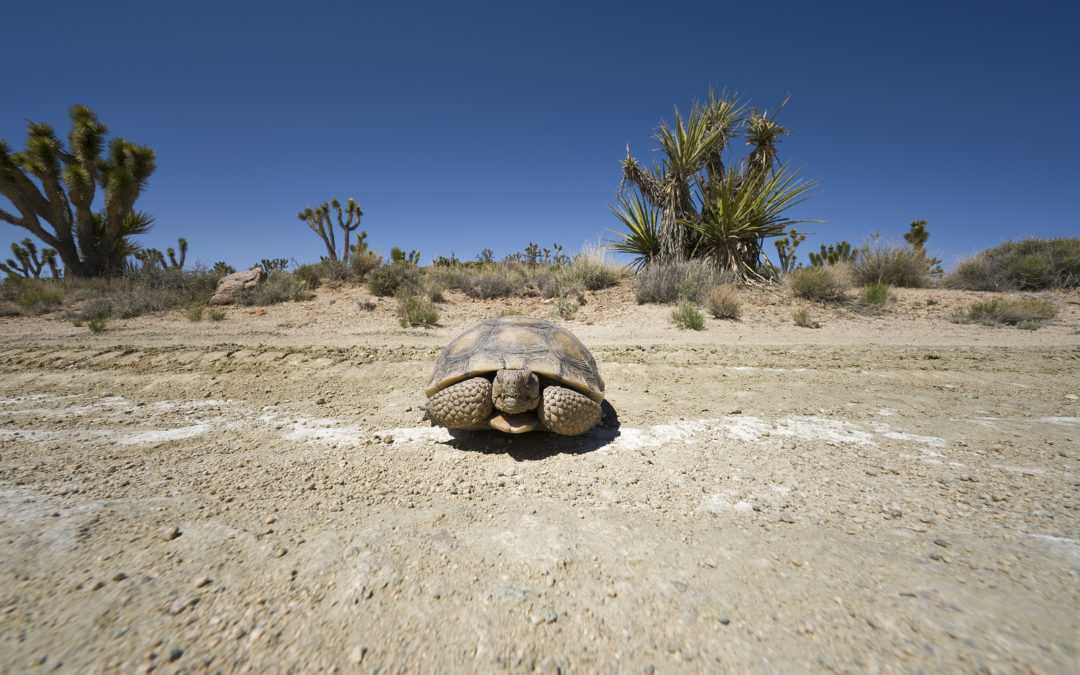 Although the Mojave Desert tortoise (Gopherus agassizii) outlived the dinosaurs, can live in deserts reaching 140 F, go an entire year without a drink, and must enter dormancy for most of the year to survive, these ancient reptiles are still struggling to overcome new threats of human disturbances and climate change.  Agricultural encroachment upon their limited range, housing and industrial developments with associated utilities, noxious weed advancements, and collection by humans are all significant human-related threats to the desert tortoise.  Additionally, changes occurring to their habitats, such as drought, fire increases, and disease all place extreme pressure on the already dwindling population of tortoises across the Southwest United States.  Finally, the USFWS listed the Mojave Desert tortoise population as Threatened in 1990 and a species recovery plan was launched in 1994. 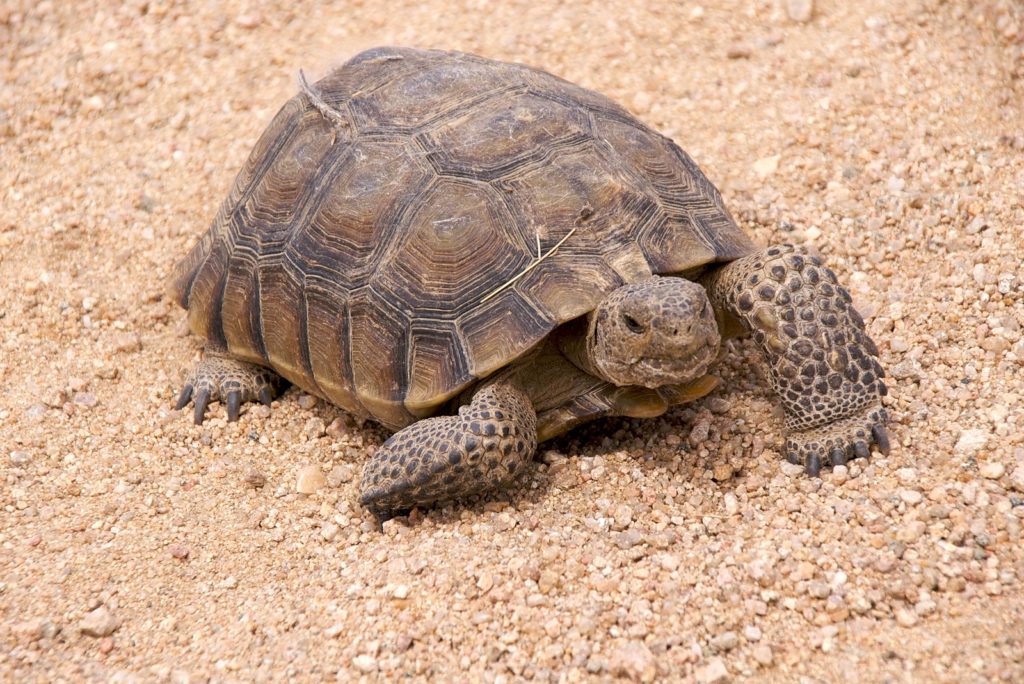 Mojave Desert tortoise survive in one of the harshest places on Earth.

As with any species, an accurate estimate of population size is needed to begin conservation and restoration efforts.  Originally, tortoise surveys were completed by biologists using a visual survey through transects across the desert.  The problem with this method is that desert tortoises spend up to 95% of their life deep in burrows underground.  In addition to being dormant over winter, these slow-moving herbivores escape the sun’s heat by remaining under the ground surface for most of the summer too.  Spring and fall, the relatively wet seasons of the desert, are the only active periods of tortoise life, however, they still only exit their burrows during the humid, cooler evenings and mornings. 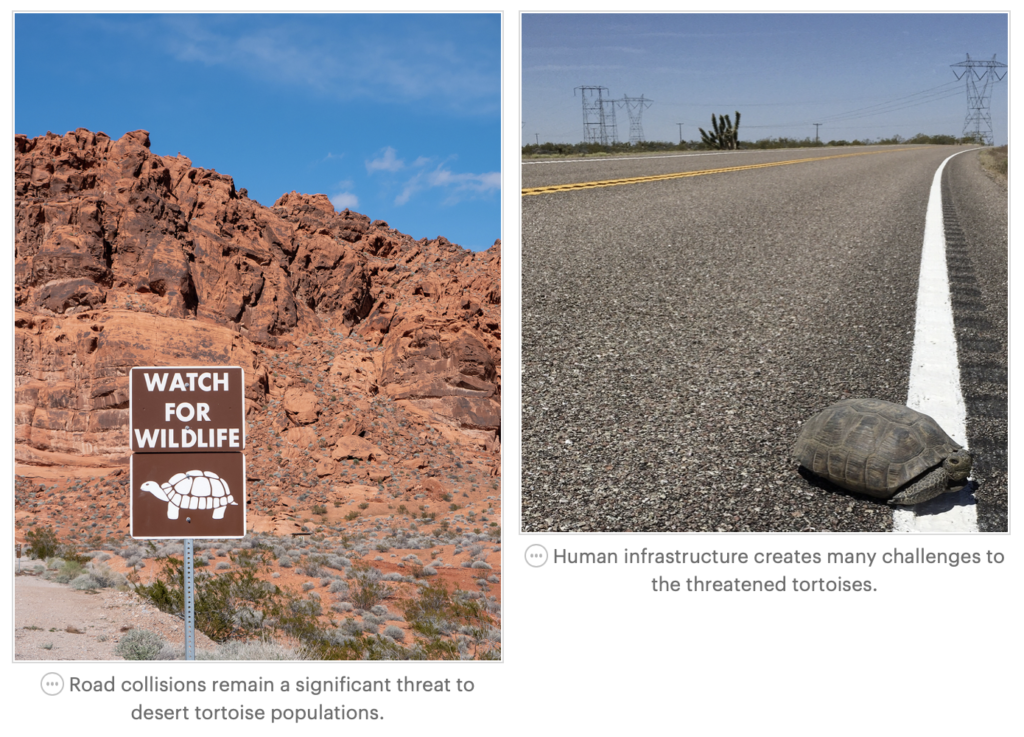 Due to the difficulties of sighting actual tortoises, biologists then would seek out burrow entrances or feces left behind to estimate population size.  From the beginning, agencies immediately questioned the validity of this method, as only difficult and invasive ways (such as using x-rays) exist to verifying if a particular burrow is active or empty.  Desert tortoises are known to use up to 25 different burrows each year, and each burrow may contain up to 23 individuals.  A near impossible equation to provide an accurate population estimate.  However, a better method is now available thanks to the keen olfactory abilities of our canine friends. 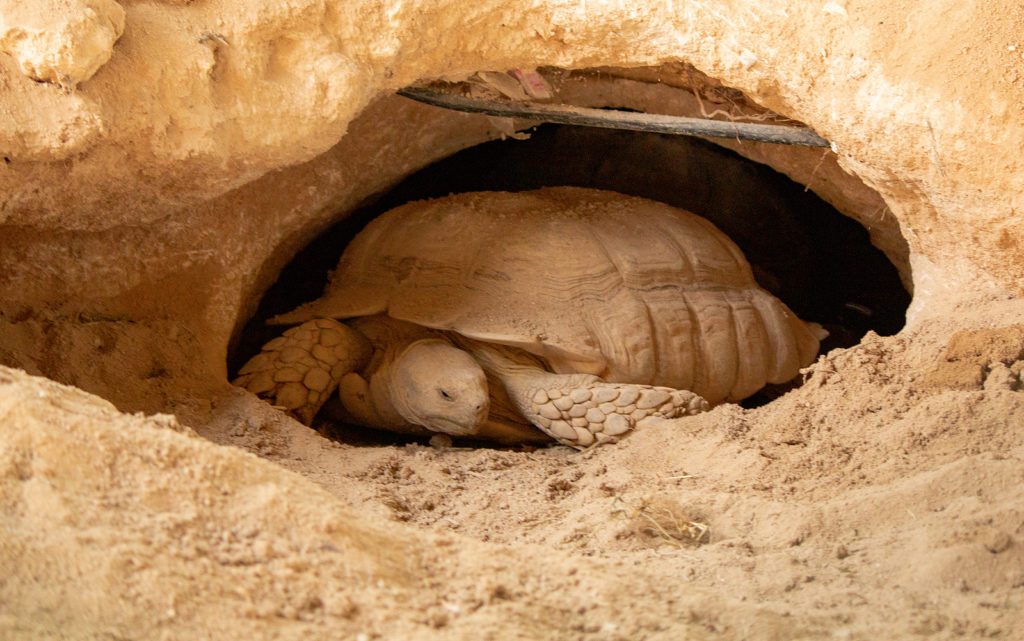 Desert tortoises spend up to 95% of their life underground to escape the desert’s extreme heat.

Just as with other species in danger, scent-detecting dogs are now taking over the search for Mojave Desert tortoise.  While scanning the landscape, trained dogs can detect tortoise both on the ground surface and deep in their burrows, plus can track their movements through feces and scent left behind.  The presence of the dog and handler has no impact upon any subterranean tortoise, compared to the old, detrimental methods of excavating burrows or bombarding them with the unknown effects of x-rays.  Multiple studies have shown a dramatic increase in accuracy by utilizing scent-detection dogs compared to human visual surveys, plus dog teams cost $3,000 less per hour on average. 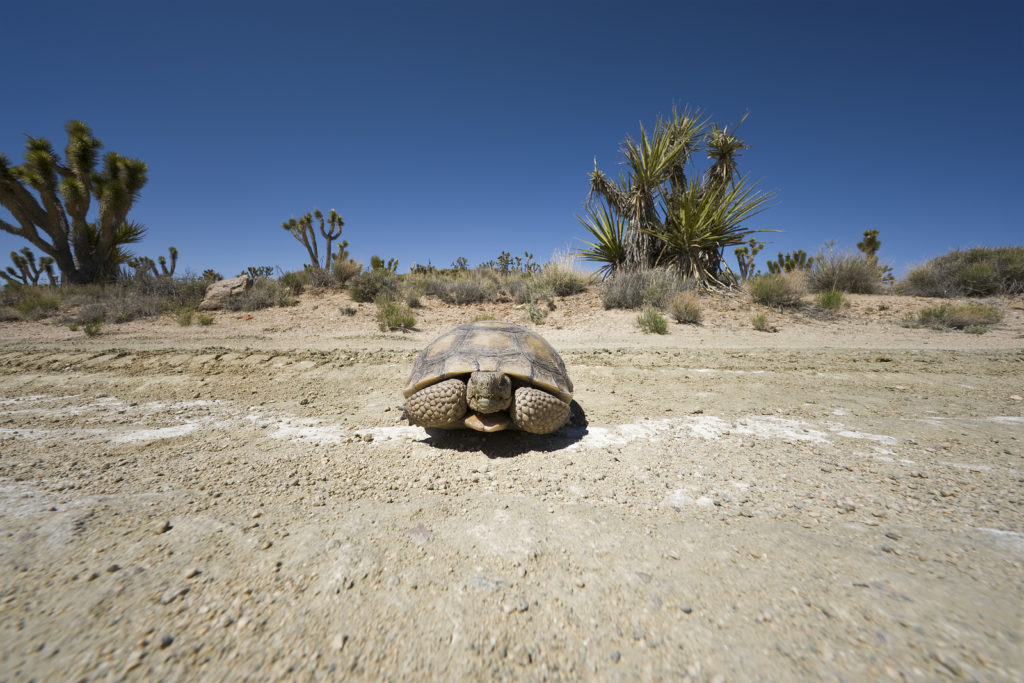 In addition to refining the accuracy of population estimates, scent-detecting dogs are also used to complete site surveys prior to new infrastructure construction projects.  These surveys assist managers in determining the critical habitat of the tortoise and adjust human activities away from these important areas.  Plus, scent-detection dogs can also be used to hunt down the invasive weeds degrading the diet of the threatened species, increasing their survivability.  The benefits of using wildlife detection dogs for Mojave Desert tortoise recovery are tremendous and could be the reason why this threatened ancient reptile may continue to exist on our planet.

For further information or to help the desert tortoise: