How do dogs assist with combating endangered species poaching? 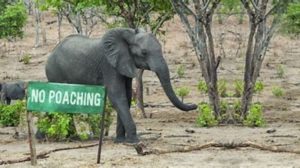 As we continue our series on canines helping with conservation practices, today we discuss how trained dogs are a major factor in preventing the extinction of some iconic endangered animals.  Poaching of critically endangered elephants and rhinoceros is a severe problem in most of Africa.  Hunted down for their ivory tusks, poachers kill an estimated 100 elephants EVERY DAY in Africa!  That means nearly 40,000 of these gentle, intelligent, family-oriented creatures are lost every year.

Even worse, rhinos have been hunted to near extinction with 8,889 killed over the last decade by greedy poachers.  Current estimates only show around 5,000 Black Rhinoceros remain alive in the world today.  Without an abrupt end to all poaching, we could be faced with forever losing both elephants and rhinos from our planet very soon. 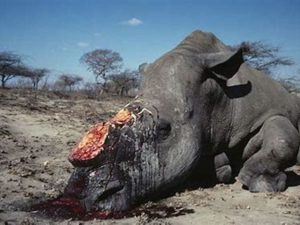 Poachers only kill for the horns, leaving the rest of the animal to rot

Once again, our “best friend” is coming to our rescue.  Multiple organizations are now training dogs to hunt down poachers.  Due to the expansive area of the African wilderness, poachers are exceedingly difficult to spot visually, even from aircraft.  However, the scent left behind from the perpetrators can not hide from the excellent olfactory abilities of canines.  Teams of trained dogs with their handlers are helicoptered into popular poaching areas to seek out suspected shooters.  When a scent is detected, the dogs chase down the poachers over miles of terrain until finally confronting them. 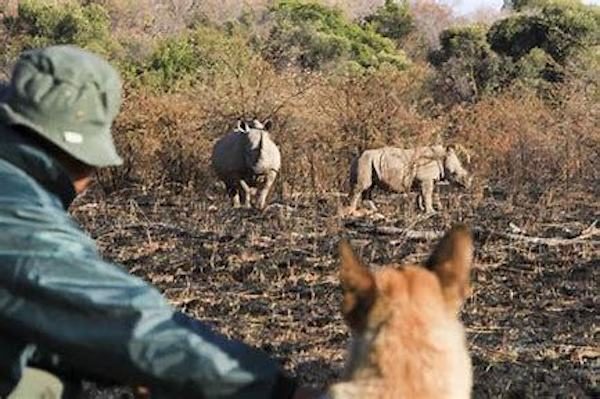 Protecting a mother rhino and her calf

Most anti-poaching dogs are trained to hold the perpetrators at bay until their handlers and authorities arrive to apprehend the poachers, who can face up to 25 years in prison.  Since all poachers are armed, this is obviously a dangerous task, so now some dogs are being trained to mimic an attack upon the poachers, who often drop their rifles and climb trees to escape the attack.  This tactic creates a safer situation for both the dogs and human handlers. 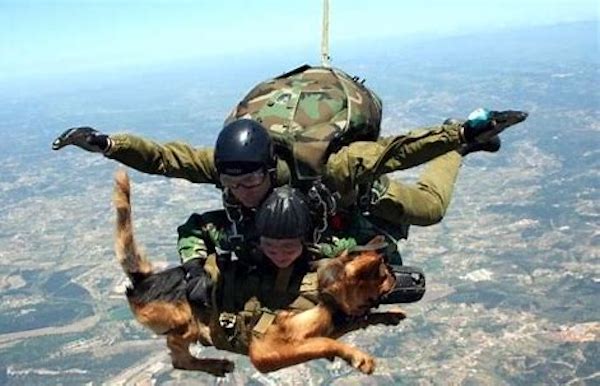 Success in curbing poaching by using dogs is clear—although official numbers across the continent are undetermined, various regions are reporting over a hundred poachers being nabbed by patrol dogs every year.  The apprehension of poachers using dogs now outnumbers highly trained rangers utilizing sophisticated military surveillance equipment.  Due to this success, the battle against poachers is now going to new heights, literally.  Dogs with their handlers are now parachuting from helicopters to get closer to target areas faster, which undoubtedly will increase the efficacy of this successful program.

For further information or to support anti-poaching dogs: