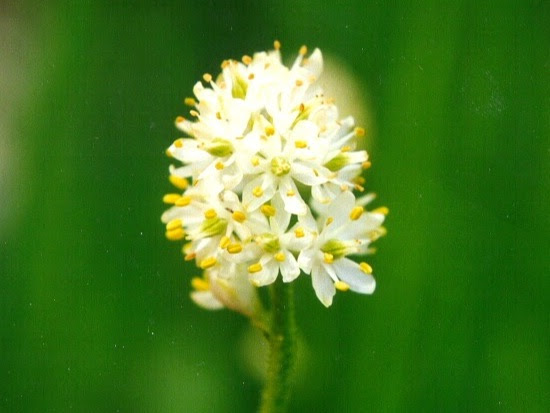 Researchers have found that a plant called Triantha occidentalis, which is a tiny white flower, is actually carnivorous.1 Originally appearing in scientific literature in 1879, it can be found in North America, from Alaska to California and Montana, and no one knew it was carnivorous.1&2

The findings were reported in August of 2021, by a team of researchers that were originally doing a study on plant genetics.1&2  They realized that this plant was missing certain genetic material (aka a genetic deletion) which is also seen in carnivorous plants.1

Looking into Triantha occidentalis further, they discovered that it does get its nutrients from insects. Its stems have sticky hairs on them that trap tiny insects. Carnivorous plants end up preying on insects because they’re able to absorb nitrogen and phosphorus, which can’t be found in the soil they grow in. It takes a lot of energy to be a carnivorous plant, so they’re usually found in areas where there’s a lot of water and sunlight. Because it takes so much energy, you really only find them in areas where the soil lacks nutrients. Only in those situations is being carnivorous an advantage.2

According to SciTechDaily, Triantha occidentalis is:2

The interesting thing about this plant is that normally carnivorous plants will keep their traps away from their flowers because they need pollination. Killing off their pollinators would be counterproductive. However, for Triantha occidentalis, its trap is near the flowers. Even so, they manage to find a balance so as not to kill off the insects that help them. The stickiness of their stems is only strong enough to capture tiny, non-pollinating insects. Bees and butterflies will be strong enough to not get trapped.1

Want to discover more? Check out one of Africa’s rarest carnivores on our blog!