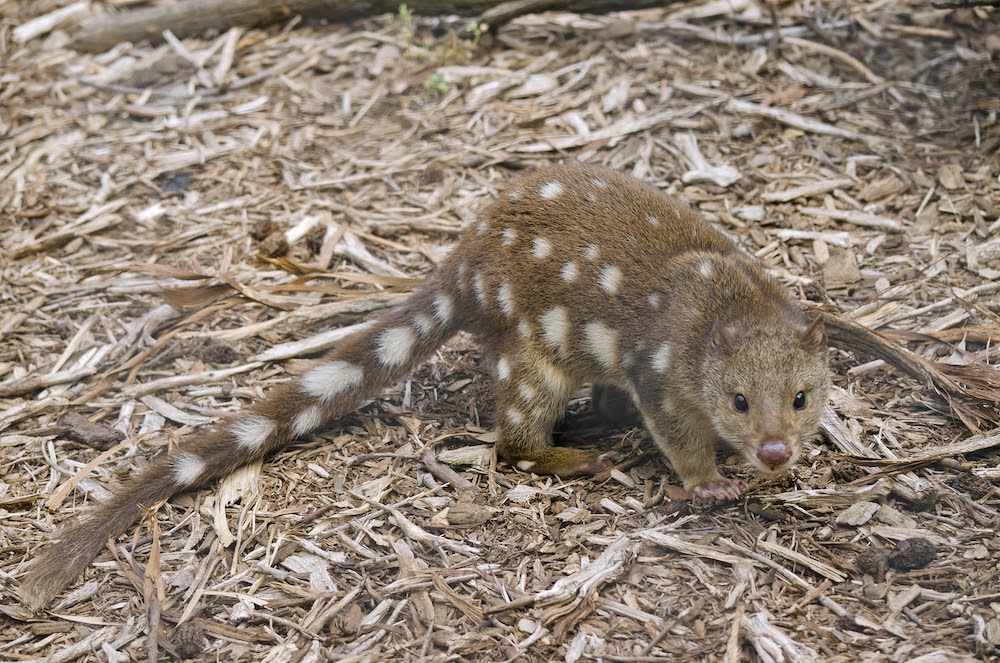 The next venture on our worldly tour of Canines Assisting Conservation takes us Down Under to examine the plight of the endangered northern quoll. First, for all the readers outside of Australia, what is a quoll? Resembling a mouse mixed with a chipmunk, quolls are small marsupials native to only Australia and nearby New Guinea. Historical genetic evidence shows they evolved on the continental island sometime during the Miocene Period, around 15 to 5 million years ago.

Six species of quoll have survived to the present day, and each occupies distinct habitat in differing locations of Australia and the surrounding islands. The northern quoll (Dasyurus hallucatus), sometimes also known as the North Australia native cat, is the smallest and believed to be the first species to diverge from their common ancestor.

Contrary to their rodent look-a-likes, all quolls are carnivorous, preying upon insects, reptiles, birds, and even other small mammals. Being smaller-sized, northern quolls tend to consume mostly insects, small lizards, frogs, songbirds, and small mammals if the opportunity arises. They stalk their prey, then leap to pounce upon the unsuspecting food item. When attacking larger mammals, quolls jump on the back of the prey and bite at the neck until disabled.

They are known to scavenge on roadkill and around campsites, bringing this usually shy recluse near humans. In addition to meat, quolls also eat fruit, with northern quolls having a particular affinity for figs. Being mostly nocturnal, quolls search for food at ground level but can climb trees if necessary.

Before European settlers arrived in Australia, quolls were widespread across the continent. As the human population grew and the land was converted to housing or agriculture, quoll populations decreased immediately. The invasive predators that followed humans caused even more damage to quoll populations.

Domestic cats and red foxes, both introduced to Australia, not only prey directly upon quolls but also consume the same prey animals as quolls, therefore the negative effects are doubled. Finally, the most recent and drastic threat to quoll survival is the noxious invasion of cane toads into the Australian ecosystem. Cane toads produce a strong poison on their skin that kills any predator.

Northern quoll numbers have plummeted since cane toad introduction in 1935, landing them on the International Union for Conservation of Nature’s Endangered Species List in 2008. The IUCN estimates northern quoll populations have decreased by up to 50% over the past ten years with the trend continuing. The Australian government also listed them as Endangered in 2005 and has taken efforts to protect current populations.

In the years leading up to endangered status, northern quoll were collected and relocated to islands where no toads or predators existed. These populations thrived quickly, proving predation and cane toad presence are the major contributors to their demise. Researchers then attempted to teach these wild quoll to avoid cane toads by using taste aversion training. The newly educated quolls were released back to former quoll territory with the preliminary results showing some success. However, local dingoes soon ended the experiment by consuming all the research subjects.

Conservationists believe this taste aversion training and protecting critical quoll habitat is the key to helping native quoll populations survive the cane toad onslaught. However, the nocturnal, solitary life of northern quoll makes finding them a challenge. In addition, they tend to prefer heavily rocked outcroppings or dense eucalyptus forests to inhabit, both of which are difficult for human researchers to navigate. Thankfully, scent-detecting conservation canines are now on the hunt for the elusive pint-sized predator. Dogs trained to alert for northern quoll scent are greatly assisting conservation efforts across Northern Australia, where cane toad infestation is most extensive.

Scent-detection canines and their handlers can quickly and efficiently scan remote areas for the presence of northern quoll. Since they are nocturnal, searches for burrows can be conducted during the daytime with no disturbance to the sleeping quoll. If active burrows are found, protections for their territory can be established preventing human development of the area. Furthermore, efforts to eliminate cane toads or predators from the area can be taken to help preserve population numbers. Finally, when new “students” are needed for future taste aversion training, scent-detecting canines can quickly find new recruits for relocation to the island academy.

Without the assistance of research dogs, northern quoll populations would undoubtedly continue their decline toward extinction. By improving the accuracy and efficiency of finding northern quoll habitat, land protection and cane toad elimination can quickly occur to save the few remaining individuals in that territory. As further canine searches occur across Northern Australia, more northern quoll become protected, saving them from the brink of extinction. Once again, scent-detecting dogs can be credited with the literal preservation of a species.

For further reading or to support northern quoll conservation: