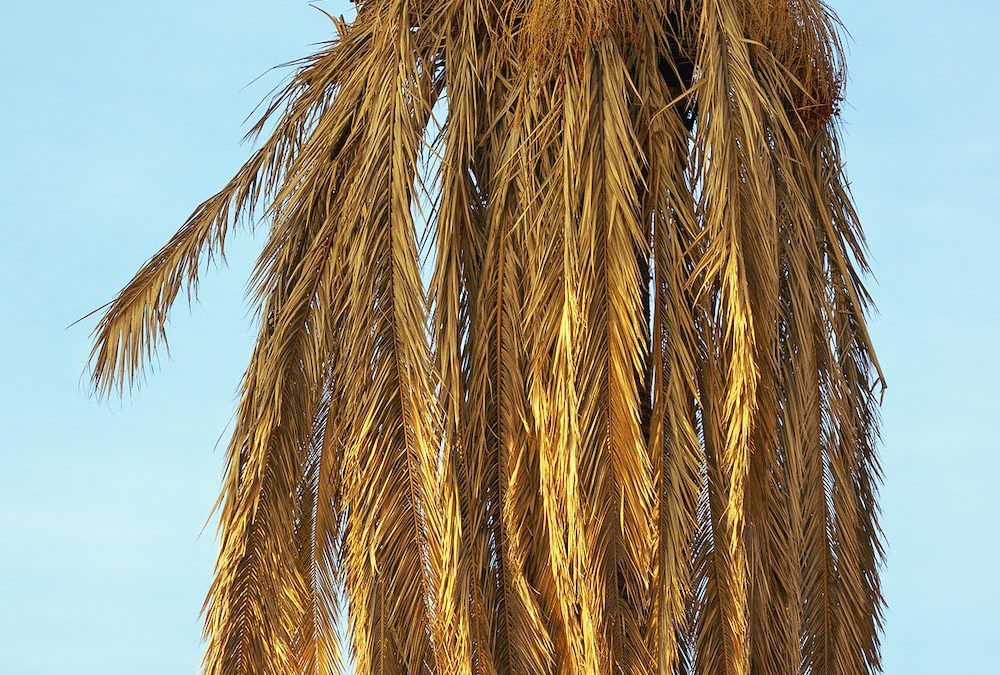 Whether it be the luscious scent of coconut oil or fronds gently swaying in the breeze, palm trees are an unmistakable symbol of summer life on the beach.  In addition to this ambiance, these large monocot plants also provide us with important crops of dates and coconuts worth an estimated $10 billion worldwide.  There are 14 native palm species in the continental US, with two additional species (date and coconut palms) that have become naturalized near our coastlines.  The species has become so iconic to leisure and travel that resorts outside of the warm habitat of living palms erect synthetic replicas to induce the feeling of relaxation among vacationers within the colder climates.  Unfortunately, our beloved palm trees are under attack around the world by a small, yet deadly, and rapidly expanding invader.

The red palm weevil (Rhynchophorus ferrugineus) is a native insect to the islands of tropical Asia, where the highest concentration of palms exists on the planet.  Within these dense jungles, the weevil population is controlled by predators, as well as bacterial and fungal infections of the larvae.  However, the red palm beetle hitched a ride on exported vegetation and other commerce from the region, spreading it to Africa and Europe where it quickly expanded without any natural control.  Eventually, the noxious weevil made landfall in North America in 2010 when it was found within some dying palms of Orange County, California.  Most destruction to individual trees comes from the burrowing larvae, who create tunnels into the center of the tree at the base of the fronds.  With each female laying over 200 eggs per clutch and adults being excellent fliers, an infestation quickly spreads from palm to palm.  For these reasons, the red palm weevil has earned the notorious award of the most destructive palm pest in the world.

Efforts are underway to curtail weevil spread and control existing infestations worldwide, however, as we have seen with other noxious invaders, these practices are often very difficult and expensive.  Current methods include pesticide application directly to infected trees or treating the soil around the base of palms, where the weevil enters the pupal stage of its lifecycle.  More inventive techniques include a large boom that extends around the tree trunk and bombards the palm with high-frequency microwaves, essentially frying all weevils and larvae.  Research continues to find the best way to eradicate known infestations; however, the most pressing problem remains to identify which trees contain the invaders.

Adult weevils are quite elusive and can easily hide in the dense bunching of fronds, where larvae are deep within the heart of the tree.  Scientists are forced to examine every trunk closely for burrow entrances, which is both a time-consuming process and requires a large workforce of technicians.  Another detection technique is to apply sensitive microphones to each tree and listen for the chewing sounds of the larvae.  Again, this process is both expensive and not practical on a large scale.  Recently, researchers considered if scent-detecting dogs may be able to lend a paw to the dilemma.  Preliminary success among the first studies shows the idea may be a breakthrough in stopping the red palm weevil!

After being trained to detect the unique odor of partially digested palm tissue left behind by weevil larvae, conservation canines can scan the base of each tree and alert to the presence of the noxious weevils.  A study using Rottweilers and Golden Retrievers (not typical sent-detection breeds) proved the dogs were able to detect 78% of red palm weevil scent baits located in the crown (top) of the trees.  Given that the species of palm in the study (Canary Island palms) can grow up to 60 feet tall, this is a remarkable feat!  More research and refinement are needed before dogs are used on a wide scale to detect and combat the invading weevil, but the implications of conservation canines could be drastically important to the prevention and eradication of the alien pest in the future.

Thankfully, the USDA Animal and Plant Health Services declared they successfully eradicated the red palm weevil from California in 2015, and no other infestations are currently known in the US.  However, every day palms and other plants are imported across the border that could potentially be infected.  The USDA plans to teach the Beagle Brigade and other scent-detecting canines at ports of entry to seek out the weevils hitching a ride on imported goods, helping to eliminate the invasion threat into the future.

So next time you are relaxing under a swaying palm, or just dreaming of such, be sure to thank our olfactory-specialist canine companions for saving them from the threat of red palm weevil destruction.