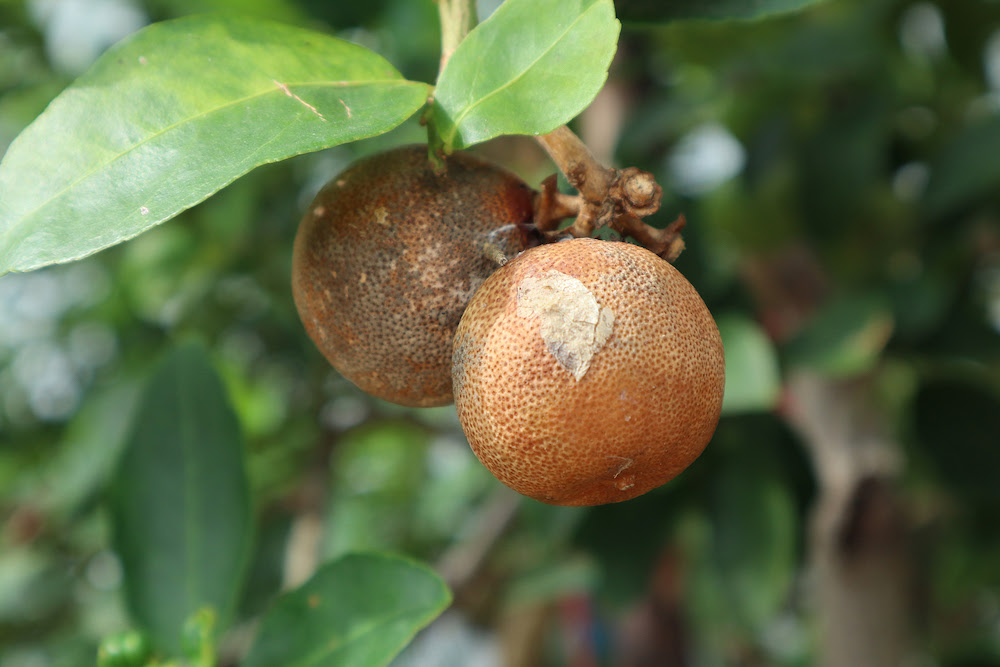 Throughout the Canines Assisting Conservation series, we have discussed the benefits trained dogs bring to imperiled wildlife, noxious species eradication, habitat conservation, and even disease prevention.  Protection of our food supply is yet another area where scent-detection dogs can aid human society.  Researchers are now incorporating our four-legged friends in the monitoring and protection of important citrus crops around the world.

In the United States alone, the annual production of grapefruit, oranges, lemons, limes, and other citrus fruit is worth an estimated $3.35 billion!  Two significant diseases have emerged over the last century that has negatively impacted the citrus industry.  These bacteria-borne infections have caused hundreds of thousands of orchard trees to be destroyed in efforts to contain the spread of the diseases.

First observed near the Florida-Georgia border in 1910, Citrus canker is a disease caused by Xanthomonas axonopodis, a bacterium that infects the trees of citrus fruits.  Once established, citrus canker causes ugly brownish lesions among the leaves, fruits, and stems.  Grapefruit, limes, and lemons are the most susceptible to infection, while oranges and tangerines can also be threatened by canker.  The infecting bacteria spread through wind carrying water from tree to tree, making rainstorms and hurricanes mass-spreading events.  Although the bacterium is benign to humans, the rotten appearance of infected fruits makes them undesirable and unable to sell.

Entire orchards can be affected, forcing managers to destroy every tree to contain the bacterium.  Over ten years, US government citrus canker containment expenditures exceeded $1.3 billion!  Not only is this process expensive, but it disrupts the orchard habitat for many species of birds and mammals.

A new threat to US citrus crops arrived in 2005, when Huanglongbing (HLB), otherwise known as “citrus greening”, arrived in Florida.  This disease is also a bacterial infection, caused by Candidatus liberibacter, but has a vastly different vector of transmission.  Instead of weather carrying canker from tree to tree, this bacterium infects a small insect that travels from tree to tree, spreading the disease.

The Asian citrus psyllid (Diaphorina citri) is a hemipteran, or “true bug,” that uses piercing and sucking mouthparts to eat the sap of citrus trees.  Originally native to southern Asia, this tiny insect has invaded the US and many other citrus-growing countries, rapidly spreading the devastating effects of HLB worldwide.  Due to the nature and size of the psyllids, efforts to control and eradicate them have proved futile so far.  Therefore, cutting and burning every infected orchard is the only current method of control, just like a citrus canker infection.  Although accurate statistics on HLB crop destruction are not known, given the current fast and extensive spread of the disease, the USDA admits the collapse of US citrus production could occur within our lifetimes if both mass infections are not quickly controlled.

Both citrus canker and HLB have long incubation times before presenting outward symptoms within the host tree, which delays detection of the infections and complicates control measures.  The application of antibiotics and pesticides to trees has not worked, plus such practices have many detrimental effects on the surrounding environment and the people eating their fruit.  Destroying thousands of infected citrus trees each year was our only hope of containing these vile bacterial infections.  Researchers then realized dogs may be able to smell what humans cannot see.

By isolating the specific volatile organic compounds of each bacterial infection, the USDA could then train scent-detector dogs to search for that unique scent within an orchard.  Preliminary results using trained dogs were so good that the USDA made scent-detecting canines a permanent member of the service’s Plant Protection and Quarantine Program.  Crews of dogs with their handlers now scan hundreds of orchard acres across several states in search of the hidden bacteria.  Incredibly, dogs can pinpoint each infected tree with 99% accuracy!

With the addition of the scent-detection accuracy, managers must now only concentrate on eliminating known infected trees, rather than thousands of innocent, healthy trees.  Not only will this save millions of dollars every year, but also allow important orchard wildlife habitats to remain undisturbed.  Finally, the work of our beloved canine companions may just have saved the ENTIRE US citrus industry!

Orange ya glad dogs are our friends?