Rumble / Unreal Animals — It wasn’t their intention, but this Canadian couple caught images of their own reflection in the eyes of a wild barred owl. Dave and Kristy had been out delivering food to a family member in rural Ontario on a snowy day. Their son suggested that they should bring their camera and join him for a walk where he knew a snowy owl liked to perch during the day. They combined the two errands and had a wonderful experience being able to see the snowy owl from a respectful distance as it looked out over nearby farmland, waiting for a mouse to wander out in the open.

But as Dave and Kristy drove home, they were shocked to see a barred owl swooping down and over the road right in front of them. This beautiful bird passed right between two oncoming trucks and they were afraid that it might have even been hit. It landed in a tree at the side of the road and they turned around and pulled over to make sure it was okay. 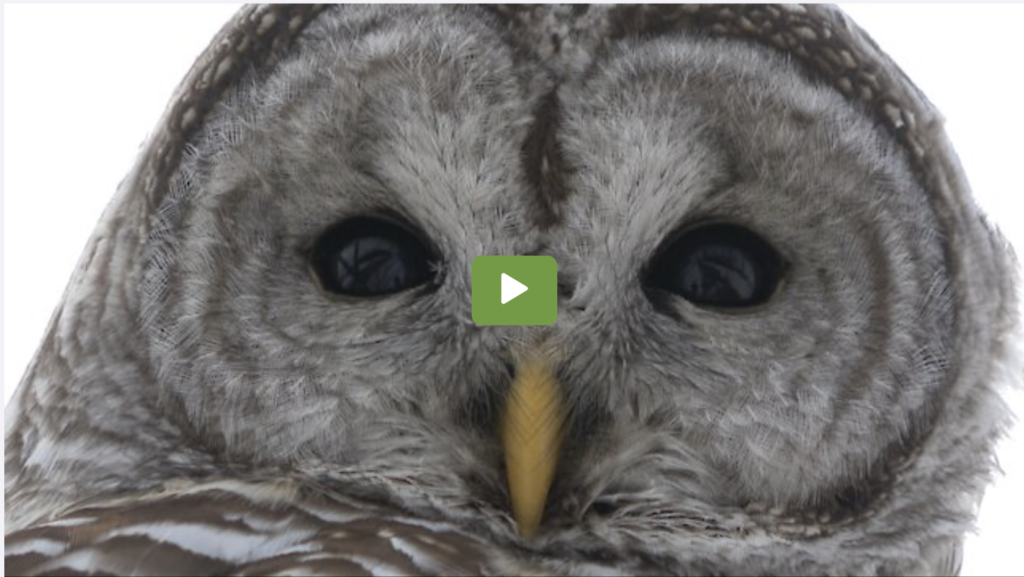 Barred owls are less timid than some owls and they will often watch people curiously, but this one seemed completely unconcerned as they slowly approached. This made them even more concerned about it so they walked up as close as they dared and watched it carefully for signs of an injured wing or other problem. As they zoomed in with their camera on the owl’s face, they were amazed by the stunningly detailed look at its eyes, beak, and feathers. These birds are incredibly beautiful and its beautiful face and intelligent gaze left Dave and Kristy in complete wonder.

After a few moments, they decided that the owl appeared uninjured and they left it to continue with its business of finding food.

When this couple looked at the video footage later, they were shocked to see that they had actually captured their own images reflected in the eyes of the owl as it looked down upon them from its perch in the tree. Their incredible close-up encounter with the owl was a complete thrill for these two nature lovers and the images that they captured will help them to remember the experience for years to come.

Owl experts have been very excited by the increase in sightings of these beautiful animals throughout Ontario and the rest of Canada during this winter. Bird watchers are eager to gather and photograph one of nature’s most photogenic creatures too. But we are reminded that these owls cannot store fat and that harsh winter weather creates a need to hunt for food that is nearly constant. With them being perilously close to starvation each day, one or two missed meals could have serious consequences for the owls. Some bird experts suggest that the owls we see are only one or two feedings away from death at any given time. If we are not careful enough, our presence might distract the owls and cause them to miss a feeding opportunity. We can help the birds by keeping our distance, making our interactions extremely brief, and limiting the effect that we have on their focus and attention. Not only are these birds beautiful, but they are crucial for keeping rodent populations in balance.